We are nearing the end of another exciting year in our society. This year was joyously filled with our popular lectures, trip to Brittany, Bradley conference and finished with a splash at our annual Christmas Party. We thank all of you for your companionship and for the year 2019.

We wish you all a merry Christmas and the best of fortune in the New Year 2020.

This magnificent monument stood in the centre of the then market place on the High Street near the Thosel and opposite the elevated house of which the arched entrance to the Butterslip now remains. According to the Annals of Ireland written by John Clyn, a Franciscan friar of Kilkenny, the Market Cross was erected on the day after the feast of St Lucy in December 1335. There is also mention of another less-imposing marble structure, known as Croker’s Cross and erected in 1407, which stood at the intersection of the Parade (then Castle Street) with Patrick Street, High Street (then High Town) and Rose Inn Street (then St John’s Street).

The Market Cross of Kilkenny was a Gothic-style arched structure, supported by four marble columns rising from a base with a number of steps. The four arches each had an effigy of a saint, two local and two national patrons: St Ciaran/Kieran and St Canice/Kenny, St Patrick and St Brigid. Above these a tall pillar supported the cross of polished stone which had a sculptured figure of the Crucifixion.

The general reason for erecting Market Crosses by the civic authorities was for religious purposes and perhaps to serve as a reminder to the traders at the market that honesty should prevail in their transactions. The Market Cross of Kilkenny was important during the season of Corpus Christi and even after the Reformation was used for similar purposes. When Rinuccini, the Papal Nuncio, visited the city in 1645 the people gathered at the high Cross. However, Cromwell laid siege to Kilkenny in 1650 which was gallantly defended by Walter Butler but after his surrender the Parliamentary soldiers desecrated St Canice’s Cathedral and the Market Cross. The symbol of the Crucifixion was their target so they broke the arms off the Cross allowing the shaft and arched structure to remain. Local lore has it that there was divine retribution and that those soldiers who carried out the desecration fell ill and died within a few days but it is more likely that they were victims of the plague that decimated Kilkenny at the time.

Up until then, the masons of the city were responsible for the upkeep and repair of the monument but this subsequently declined and it fell into disrepair and afterwards its arched canopy was alleged to give shelter to gamblers and be the gathering place for other idlers! It was removed by the Corporation of Kilkenny in 1771 on the grounds that it had fallen into a ruinous condition and was a danger to public safety. However, it was also stated that the Corporation had intended to re-erect the structure on the Parade but this never happened and it appears that the stone rubble was used for general building purposes in the city. Croker’s Cross was also removed and both structures were replaced with a public water pump! Doubtless, both thoroughfares were somewhat impeded by these structures as the traffic in the city centre increased into the middle of the 18th century.

Today the Market Cross is but a memory of Kilkenny in the olden time although it lives on in story and song. For example, Paris Anderson (1819-1857), a native of Kilkenny, penned a poem which included the following lines:
And the record hath not faded;
Fancy still the scene can trace,
When the Cross was consecrated
In Kilkenny’s market place.

John Prim (1821-1875), the proprietor and editor of the Kilkenny Moderator newspaper, has left us a very detailed account of the Market Cross of Kilkenny in the Transactions of the Kilkenny Archæological Society for 1853. There are drawings of the Cross that have survived, mostly from the 18th century, all showing the cross not as then having been damaged following the depredations of Cromwell’s soldiers but intact with artistic licence applied to repair the damage. William Robertson (1770-1850), Kilkenny’s first architect, acquired two drawings of the Cross which he intended to use in a book on topography, one of which is depicted here.

It has been suggested that if the High Street was ever to be pedestrianised a replica of the Market Cross, the dimensions of which are exactly known, should be erected in the place where the original had stood for more than four centuries. Alternatively, but perhaps more realistically, a replica could be situated on the open pedestrian area of the Parade which may have been the plan envisaged, by the Corporation of Kilkenny, for the Cross’s resurrection almost 250 years ago. 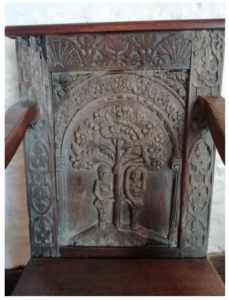 This 16th-17th century Adam and Eve Chair is a familiar object from the Society’s collection at Rothe House but there may be more to it than meets the eye.

The purpose of such imagery is the subject of debate. Catherine Belsey explores the spiritual meanings associated with this imagery, and posits the notion that the use of imagery of the fall carved on furniture such as coffers, beds and chairs suggests an ambivalent societal attitude to the institution of marriage. [2] Marriage might unite man and woman in a perfect state instituted by God, but…… having eaten of the fruit of the tree of knowledge, of sexual pleasure and desire, marriage also endangered the immortal soul. Further, Belsey refers to typology, an ancient form of biblical interpretation.  Often Old Testament stories were used as ‘prefigurations’ of the crucifixion and thus salvation. Imagery of the fall, representing the mortality of man, can thus be seen as a reminder of the sacrifice of Christ and accordingly of salvation of mankind.

Interestingly, a similar 17th century chair can be seen in Cotehele House in Cornwall and such carvings were often painted in bright and expensive colours. So, perhaps our chair, which holds hidden and perhaps unfamiliar meanings was also once brightly painted and is not as familiar as we thought.