Welcome to this year’s second edition of our Kilkenny Archaeological Society’s newsletter. This time of year is awash with events and festivals across our nation for any and every interest. This is also a busy time in our Society with events coming up such as the Rothe House Garden Party, KAS trip to Tipp, Heritage week and the build up to the Bradley Conference.

We would like to extend a heartfelt welcome to Virginia Teehan, new CEO of the Heritage Council. She was interviewed by Maurice O’Connor in his programme: Kilkenny Today on Kilkenny Community Radio in early March. The interview started with her new role and her vision for protection, conservation and promotion of heritage in Ireland and ended with her previous role in UCC, and specifically her role as Executive Producer of the TV documentary The Irish Revolution, and her input into production of the book on which the TV documentary was based: “Atlas of the Irish Revolution”. It is well worth a listen and can be found online at communityradiokilkennycity.ie. Lastly we offer an apology to Kilkenny Community Radio as they mistakenly were mentioned as Kilkenny City radio in our last newsletter.

A Temporary Pond Habitat –
A Legacy From the Bryan-Bellews Estate

The pond on Dom Brennan’s farm, beside the access road to Jenkinstown Wood car park, is an example of a temporary pond habitat. The pond is surrounded by native trees and it has the status of a wildlife sanctuary. It is fed by precipitation and drainage water from Jenkins Town Wood.  In winter the depth may exceed 1 m and it may dry up in summer.   This pond was designed to rear ducks for the Bryan-Bellews who owned Jenkinstown Park from 1640 to 1935.  Game shooting and eating was important on estates.

In this pond the dominant aquatic plants are phytoplankton, filamentous algae, starwort and water crowfoot.  In May the water crowfoot (Ranunculus aquatilis) is the most obvious – its white flowers cover the pond surface.  This plant is rooted in the sediment, has long stems with broad floating leaves and finely divided submerged leaves.  It provides a great source of shelter for aquatic invertebrates.

Invertebrates in the pond include worms, crustaceans, insects and pond snails.  Some aquatic worms live in the sediment and burrow deeper when the pond dries up.  Flatworms creep through the vegetation grazing algal cells.  Some of the crustaceans will be familiar to biology students because they include water fleas (Daphnia), fairy shrimps and ostracods which feed on phytoplankton and can produce protected eggs that survive desiccation.  The absence of fish predators enables the larval stages of beetles and aquatic flies such as midges and mosquitoes to be abundant.  Various water bugs such as the water boatman are also plentiful.  Luxurious plant growth attracts pond snails and both spiral and coiled shelled species are present.

Apart from thirsty cattle, the most obvious animals that use the pond are the birds – moorhen, coot and mallard breed.  Other ducks such as widgeon occasionally visit the pond.  There is an island area that provides safe nesting sites for the mallard and moorhen.  Earlier this year a moorhen reared five chicks.   At present (May 2019) a coot has a floating nest in the pond and other members of the flock are frequently present feeding on the vegetation and invertebrates.  The pond also provides an important habitat for frogs to breed, a rich source of food for tadpoles and time to metamorphose into frogs before it dries up.

The temporary pond provides an unique ecosystem on the farm, supporting plants and animals that delight the observer.  It is a habitat that is threatened by climate change and is a legacy for wildlife that is important to protect. 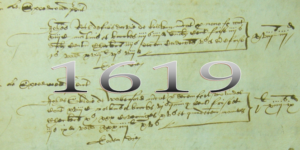 John Rothe of Rothe House in Kilkenny City wrote a remarkable document 400 years ago this year, namely his 1619 will. Because of his detailed will we know about the original furnishings, layout of Rothe House and an insight into John Rothe himself.

In 1619 John Rothe was a successful merchant. He had previously been an alderman and member of parliament. He was about 70 years of age and was to die the following year. Since he had commenced building his large stone house on Parliament Street, Kilkenny, he had amassed a large property portfolio, acquiring lands that had been sold on after the dissolution of the monasteries.

>From his will, we can see that John Rothe valued tapestries, linen and musical instruments. He also mentions feather mattresses, pots, pans, utensils, tables, bedsteads, seats, plate, a cypress chest, table linen and virginalls. Even cloth and clothing imported from Bristol get a mention.

By the law of the day John Rothe’s wife Rose Archer had statutory rights to one-third of his property. This is ringfenced by conditions John sets in his will. Rose is to have the middle house, and her own kitchen in the outscale. She is to have the big cellar under the street entrance, plus a share of the new house (the Third house had been built in 1610). Together with her son Peter, she is to share the gardens, the castle and the pigeon house, plus the big kitchen, oven and brew house in the Third House, along with the well and cistern.

The will is not the only written evidence we have about John Rothe – there are trade records, inquisitions (probate reports), as well as Corporation records – but the will is the most historically important document.

We owe the will’s existence (the original did not survive the Four Courts fire of 1922) to a Kilkenny man, George Burtchaell of Graiguenamanaghwho, in the 1880s, meticulously transcribed it from the original. The will was published by Healy in 1893. 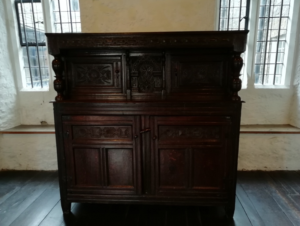 This is a Court Cupboard and is one of our latest acquisitions for our collection. It is housed in the Phelan Room.  See photo above. Court cupboards evolved from the medieval side table and set of shelves to become an enclosed and semi- enclosed piece, with two or three tiers on supporting pillars sometimes with concealed sections, decorated in elaborate carving.  They were often made of strong and durable native timbers such as Oak for their resistance to rot and insects. They were prestigious items of furniture, used to display a family’s wealth and status, and were often situated in the hall where guests were entertained. Our court cupboard is carved with geometric designs, flowers and foliage.

The word ‘court’ comes from the French word for short as these pieces of furniture had to be short enough to reach, and to display a family’s prestigious items of silver, pewter and pottery and house culinary goods.  Our court cupboard, typical of the sort of furniture which would have been used by the Rothe family, has no open shelf to display silver and pewter plate. The cupboard would have been used to store foodstuffs such as salt, sugar and the precious spices so vital in flavouring food and masking the unpleasant flavours of decay.We also have a display of pewter in the Phelan Room.

We are still working on our graveyard inscriptions project which is uploaded to the KAS website for easy access. This is a collaboration between the Library Committee and the Website Sub-committee. Another batch of digitizations have just been successfully uploaded. They are based on the transcriptions done by members of KAS in the 1960s to 1980s. The places are Callan St. Mary’s, Conahy, Coolcraheen, Jerpoint Abbey, Killaloe old, Killaloe new, Kilmanagh, Kilminick, Moyne, Rathbeagh, Columkille (Thomastown), St. Mary’s Church of Ireland (Thomastown), St Mary’s Catholic (Thomastown), Thomple (Thomastown), Tullaherin.

This annual event in the sunshine is always a very popular social event and an opportunity to meet and greet other members of the society. This year attractions includes strawberries and cream, food and drinks of all sorts, a talk on the historic garden itself, an opportunity to meet the skilled and dedicated garden team lead by Mary Pike. Please note the date which is amended from that in the original printed programme.

Rarely has a coach trip generated such anticipation and excitement as the upcoming Trip to Tipp. And little wonder as the planning has been extensive, the researched route is full of interesting talking points, while the destination, Fethard town, is Ireland’s most complete walled Town. So if your interest is history – either folk or ancient – scenery and excitement, love and romance, this outing captures them all in one delightful, all-day experience. The coach departs from Dean Street at 9.30 am and will be traveling by on a well-selected route which brings contact with ancient roads, druidic settlements, early monastic buildings and towns, high crosses and round towers, holy wells and battle locations through locations noted for their stunning scenery and breath-taking views.

Included in the very keen price is morning coffee/tea in a sylvan, outdoor setting, lunch in a traditional and famous pub/restaurant and admission to Ireland’s newest and arguably best, well-endowed museum, not to mention a guided walking tour of historic Fethard.  A bargain at just €50.00 – especially when you add the views, the commentary on the passing scene by Pat Nolan, and the companionship of interesting and like-minded persons. Ring or call in to Rothe House and book your space with a deposit of just €20.00 – while spaces are still available.

A family home for many generations, historic Kilrush House is one of these hidden gems which so often we would welcome an opportunity to visit and hear the story of the house and the famed family who live there.  Please contact Rothe House to have your name included, indicating if you wish to partake in the carpool by offering to drive or looking to require a seat.  A small charge will be collected on the day to help defray expenses.

The Bradley Conference is certainly the most ambitious element of our annual programme. The theme this year is Irish Agriculture through the ages. An outstanding facility of speakers will address aspects of this industries impact on the rural economy and lifestyle of the Irish over the many centuries reaching back to the time of hunter-gatherers.  A full and detailed programme is currently available in Rothe House.

All these events are organised by the Programme Committee who invite members to join them and contribute to the devising of the lecture and outing programme for 2020.  The Committee meet over lunch in Bollards once monthly.