Welcome to the second issue of our still new newsletter.
We striving to fill it with items that we hope are of interest to you, our dear reader. This includes local history, events and news from the Society. We hope you enjoy it and will share it with friends and family.This newsletter has a new featured named Kilkenny’s Historical Places and is intended to be a suggestion for a trip to a local place in County Kilkenny. It is written as a piece of local interest and is not an advertisement nor is it written for profit.

If you have topics or news of interest to the readers of this newsletter please contact the PR Subcommittee by email to the following address: PRofficer.kas@gmail.com. 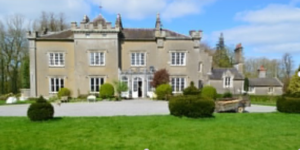 Having passed by many times on the old Dublin to Kilkenny road, I decided, as it was ‘Heritage week’, I would take the time to visit and take a tour of this wonderfully gothic looking building visible beyond its’ railed boundary.  We are fortunate to have the owner Geoffrey Cope, a historian, guiding us today. He explains that taking its name from ‘Sean Cill’ or ‘old church’,  Shankill Castle has indeed the remains of an old pre-Reformation church and graveyard in its demesne adjacent to the front entrance porch. The castles’ location is a short distance off the Paulstown exit from the M9 motorway.  The original castle stood as a single Tower House built by the Butlers of Ormond in the 1500’s.  It was later rebuilt in 1708 by Peter Aylward who had bought the land from his wife Elizabeth Butlers family.  At the rear of the castle, two plaques are recessed into  an exterior rendered wall, one bearing the name ‘Peter Aylward Esq. May 1713 , the other displaying the same date and the initials – P.A. and E.B.  The publication ’Buildings of Ireland’ describes Shankill as  ‘A detached five-bay two-story Gothic-style house with dormer attic, c1825 incorporating fabric of an  earlier house.

In 1820, Nicholas John Patrick Aylward extensively remodeled Shankill Castle in the Gothic taste, most probably to the designs of Architect, Daniel Robertson.   In 1856 James Kearney-Aylward made further alterations to the house to the designs of William Dean Butler and added a conservatory in 1861, which no longer exists, to the west facing side, with access from  the drawing room.  It was attributed to the designs of Richard Turner (1798-1881)  and dismantled more than 50 years later.   Oddly, during the inordinately dry weather of the 2018 Summer, the curved outline of its  foundations reappeared as a definitive scorched pattern in the grass beneath.

On entering the castle, beneath the Aylward coat of arms and through a light-filled Gothic portico , lies a dark panelled entrance hall with a large polished limestone Kilkenny marble fireplace, unusual in its design as it is without a mantlepiece. Contrasting to the dimly lit hall are Elizabeth Cope’s riotously colourful paintings which adorn the walls here, and flourish throughout the castle.  Geoffrey turns our attention to a circular ‘rent table’ with numerous surrounding drawers in which rents collected from tenant-farmers were stored and locked away.   Straight through the elegant doors, are we are now into a dining room, and at the far end is  a large wood-carved gothic pelmet framing the top of a bay window which overlooks the geometrically serpentine ornamental lake to the rear of the house, reshaped from its once original  elongated canal shape.  In an earlier plan, this room was marked as a billiard room, but it now contains a large wooden buffet bearing the Aylward coat of arms – the raised harm holding a  ship’s anchor, the family’s connection to its’ sea-merchant trading.

To the far left of the hallway is the drawing-room, minus it’s conservatory now, but resplendent with a Carrera marble fireplace and 16 ft high gilt mirrors transported in-tact by horse and cart from Waterford port.   Moving on to the  main stairwell,  and it is covered with a warm flaxen-coloured hand painted  wallpaper imitating Sienna marble. It is dated and signed ‘John O,Car’l, (0’Carroll) September 10, 1880 Kilkenny .

Below-stairs, and under the original tower house is the kitchen and ancillary storerooms and sculleries; the large open fireplace over which the roasting spit was arranged. There are thirty chimneys in the castle, and most of them still in working order today.  The bedrooms on the second and third floors host fee-paying guests. We are back outside now, and to the east is the stable yard .  This, together with  the  addition of a castellated lodge to the  existing entrance of the demesne, are  attributed to Daniel Robertson. An avenue of lime trees, leading to an old gateway, once was an axis point to a vista of a pre-1840’s column or garden adornment long since disappeared.

Geoffrey and Elizabeth hold exhibitions, talks, workshops and tours.  Their son Reuben and his wife run the  quintessential Coach House Café.  Guided tours run each day during annual Heritage Week, and each Sunday until the end of October. 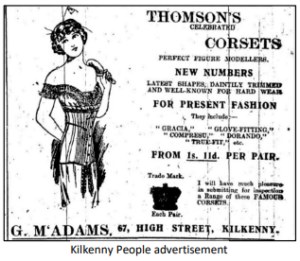 From Tightening Corsets to Casting Votes: A Glimpse at Women in Kilkenny in 1918

The Women’s History evening at Kilkenny Archaeological Society will focus this year on the stories of some of the thousand Kilkenny women who protested against government plans to make their men join the British army in 1918. These stories will be accompanied by a talk on the social conditions of women in the period. Ever since the project launched in June, stories have been coming in from all over the country. The women lived in Kilkenny in 1918. Many of their descendants have since left the city. Despite this, their grandmothers and great aunts are still remembered.
It’s been fascinating to discover these young women, many in their twenties and thirties, others much older. Some were as young as eleven or twelve when they signed their names under the names of their mothers or aunts. Some worked in shops; some were servants; some were teachers.
These were women like Anne Coogan of Green Street. She was born in 1886, one of seven children of James Kavanagh and Mary Hayden who farmed at Coolcullen, Mothel. Anne’s brother, James, helped organise the first Rural Feis at Coon in 1895. Anne danced hornpipes and reels there and Douglas Hyde attended. She corresponded with Douglas Hyde during the 1930s and played an active part in the Feis movement. Anne married Patrick Coogan in 1908 at Ballyfoyle. By 1918, the Coogan family was living at Troy’s Orchard, Green Street (behind Mulhall’s Bakery). Anne had a lodging house there afterwards. She was a member of the Gaelic League. She was famous for her roses (courtesy of Canice Coogan). 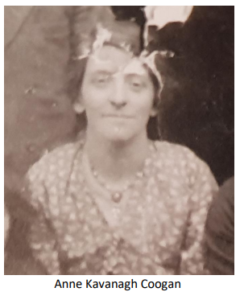 One of the youngest signatories was Kathleen Bollard. She was born in 1905 and was 12 years old when she signed beside her mother, Mary. Her parents were Mary (née Morrissey) and Daniel W. Bollard. Her siblings were Paddy (later Fr. Paddy), Michael, Joe, Maisie, Rita, Christy and Des. She married Jack Feehan who worked in the bank. They had one child, Joan, in 1929. Kathleen went to Madrid in Spain sometime before the Civil War began there (i.e. before July 1936), a position having been found for her by the Loreto Sisters as a ‘companion to young ladies’. She went on to become a teacher of English. She continued to live between Spain and Enniscorthy until the 1970s when she came to work in Dublin. She died in Enniscorthy at the age of 92 on 26 August 1997. Her family still remember her glamour on her trips home to Kilkenny and later to Enniscorthy (courtesy of Isabel Bennett). 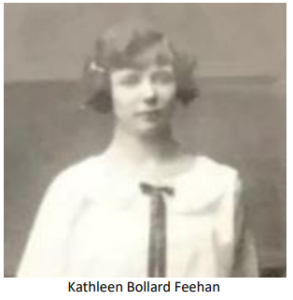 Their stories will now permanently sit beside the Lá na mBan ledger in the archaeological society’s archives at Rothe House. On 19th September at 8pm more stories of the women will be told in Rothe House. There will also be a talk by Ann Murtagh : From tightening corsets to casting votes: a glimpse at women in Kilkenny in 1918. For the full list of the women of 1918 see the Kilkenny Archaeological Society website.

This editions Curators choice artefact is an absolutely stunning piece of functional wear. Called a Chatelaine, meaning ‘Lady of the castle’, they would have carried all the tools of household management. Our example is that of a dressmakers and held everything needed to cut, measure and pin, attached to the waistband or belt for ease. Made of metal and dipped in silver, our Chatelaine consists of a centre piece with an intricate design of Charles I and his coat of arms. Quoted is the motto of the British chivalric Order of the Garter ‘Honi soit qui mal y pese’ – ‘Shame be to him who thinks evil of it’. Suspended from this centre piece by chains are a (L-R) Scissors sheath, thimble, pencil holder (pencil still enclosed), paper cutter and needle holder (needles still contained) Attached to the back is a hook which would have looped over the waistband or belt of the wearer. The Chatelaine was donated by John Finn, John Street, pre 1965.

See photos of Chatelaine: Image above shows she Chatelaine containing (L-R) Scissors sheath; thimble; pencil holder; paper cutter; needle holder. The image below has a closer photo of the centre piece depicting Charles I and his coat of arms. 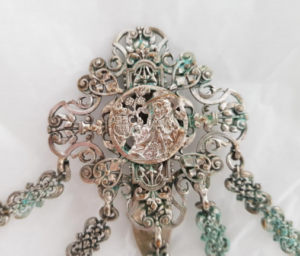 Final details have been released of this year’s Kilkenny Archaeological Society annual overseas visit to South Wales.  We will be based in the Leading Hotel of Historic Carmarthen and will enjoy a series of visits from there over the following week. We will use the now tried and trusted and popular mode of transport of Coach and Ferry from Kilkenny back to Kilkenny, thus eliminating all the hassle associated with todays airports. A colorful, free brochure is available in Rothe House giving full details, prices and time table.
Some of the high lights include  St David’s City – the smallest in Britain and its imposing ancient Cathedral; a conducted tour of the town of Carmarthen bring stories of its endless array of colourful and flamboyant personalities. We will be led by author and historian Robert Lee. One day is devoted to the famous Castle at Caerphilly, visually imposing wjth a compelling story to match.  Of course this being Wales, the heroic and tragic story of a lost national industry, coalmining,  is explored in the Big Pit National Museum. We enjoy a short train ride  on the restored Gwili Steam Railway before enjoying the truly majestic National Notanical Garden of Wales.  Time is spend at the fountain head of Norman influence –the large and impregnable Great Castle of Pembroke.
We visit charming Tudor Merchants House in delightful Tenby where we can compare it with its almost contemporary Rothe House. A special delight for book lovers with be the Market day visit to Yay-on-Rye which has established itself, improbably some might say, as the leading book town in these islands.  On Friday there is time for a visit to the historic house and gardens at Aberglasney House, described, fittingly by the BBC’s TV series as a “Garden lost in time.”Later we take in the truly awesome size and range of items in the National Waterfront Museum in Swansea.
No visit of KAS especially to Wales would be complete with our exploring the culinary skills and opportunities to be enjoyed there.  From quant country Inns to local hot-spots an exciting and wide ranging selection has been explored and will be available for all to enjoy.

We are delighted that such a distinguished and learned panel of speakers will address various aspects of this topic while paying tribute to Kilkenny’s most distinguished archaeologist and historian.