Welcome to this year’s third edition of our Kilkenny Archaeological Society’s newsletter. I was so fortunate as to be on a tour yesterday of the Medieval Mile Museum here in Kilkenny. Grace Fegan, Curator was our delightful and extremely knowledgeable tour guide. Much has happened since the opening of the museum including the return of the skeletons found by the front gate and many other items excavated on site. It can only be warmly recommended to go and enjoy our local museum.

Kilkenny Archaeological Society expectantly presents the Bradley Conference, which takes place here in Kilkenny on the 18th and 19th of October this year. The topic this year is agriculture and it promises a new perspective on the subject with a distinguished group of lecturers.

When skeletal remains were discovered three summers ago during excavations at the entrance to the 13th Century St Mary’s Parish Church, it resonated with the public who came day after day to watch archaeologists painstakingly uncover the findings. Now, the remains of two women and a child, concealed for centuries, are central to a fascinating permanent exhibition at the Medieval Mile Museum.
“Until the mid-1600s, only the very wealthy were buried in coffins” said Grace Fegan, Curator. “Poorer parishioners’ bodies were put directly into the soil, dressed in a shroud. It is ironic that these people are now alongside the grandiose, ornamental tombs of the super wealthy inside St Mary’s. It’s a nice ending to what must have been a very hard life”.
In association with the National Museum of Ireland and funded by Fáilte Ireland and Kilkenny County Council, Kilkenny Civic Trust have been working for the last 18 months to deliver the exhibition to the public. “Since before the museum opened its doors, it had been our intention to install this exhibition”, said Grace. “To do it correctly we needed to secure funding, find the right designers and make sure we could do justice to the stories of the remains”. The exhibition team included Grace, archaeologist Coilin Ó Drisceoil, osteoarchaeologist Dr Linda Lynch and exhibition designers Tandem Design.
The exhibition presents opportunities for discovery-led, multi-sensory and interactive learning. Within, the remains are respectfully displayed and accompanied by minimal but meaningful interpretation. The intention is for visitors to feel a sense of exploration facilitated by the design while having the option to choose if they wish to enter the internal space.
“The new exhibition is a particularly good opportunity for school children to come face to face with Kilkenny’s past and understand what life was like for those who were less fortunate. It’s also a very tangible way for people of all ages to understand the layers of research and analysis that have ultimately led to a fuller picture of life and death in medieval Kilkenny”.
For more information visit www.medievalmilemuseum.ie or call 056 7817022 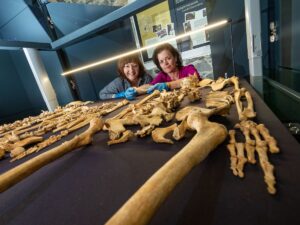 The value of Teasel past and present in Kilkenny

Teasel, Dipsacus fullonum, is a native wildflower found mainly on embankments, hedgerows and river banks.  The Irish name is Leadán úcaire.   It is a tall majestic biennial reaching about two meters in height.  In its first year it forms a rosette of oblong serrated leaves which blend in unobtrusively among green foliage.  In the second year a distinctive prickly stem rises up vertically producing egg-shaped flower heads in July and August.  These are covered with spiny bracts and rings of pink-blue-purple flowers.
This is a valuable garden plant for wildlife.  The stem leaves are opposite and joined at the bases so they can collect water droplets and provide drinks for insects, indeed the name Dipsacus is derived from the Greek word for thirst of water (dipsa).  The flowers attract bumblebees, butterflies and other pollinators and supply them with nectar (carbohydrate) and pollen (protein).  The seeds attract garden birds such as goldfinches.  Like many wildflowers they self-seed freely if left unchecked.

Historically dried teasel flower heads were used in the textile industry to comb or raise the nap on woollen cloth and they were once cultivated in Kilkenny for this purpose and supplied to the Woolen mills.  We have some references in our library to their cultivation in the city environs, two examples are given below, one of them in 16th century English.

“TEASEL:  The wool-cottoners cultivate the teasel, Dipsacus fullonum, in the suburbs of the city, for their own use: some years ago the teasels were brought through Dublin from the county of Wicklow, but the cultivation having been given up there, it was introduced here.  From 7 to 8 acres of it are usually grown every year, chiefly in gardens near the town wall; the rent of which ground is about four or five guineas for half an acre: a good acre produces 50000 or 60000, worth 15s per thousand.
About Easter the seed is sown in beds; they are transplanted into potatoe ground, as soon as the potatoes are dug; and if the soil is not very rich, fresh manure is added.  The plants are managed like cabbages, and placed in rows, 18 inches from each other in every direction: a plant bears from sixteen to thirty heads, which are cut off as they ripen, that is when the flower drops, which is about the latter end of August.  The head on the leading stem is called the king teasel:  and as many of these as are necessary are left for seed.  The others are termed according to their size, seconds, thirds and buttons; the last are very small, and used only to fill vacancies between the large ones in the handle:  the heads when cut are tied in bundles ten together, and put on sticks to dry in the sun.  They are an uncertain crop; for dry weather in spring, or at the time of transplanting, injures the young plants, which however might be obviated by watering; and a wet season at the time of flowering, rots the heads.  The stalks are used for wattling beneath the thatch on the roofs of cabins; and the stalks of half an acre sell for a guinea.” [p 548]

Shomakers, weavers, and teaslers putting upp shopps nere the market cross:
“Item, where by reason of div’s shomakers. weavrs, and teaslers putting upp shopps toward the markett place of the said towne much deformitie and inconvenyencs daily appeareth whereby the wourshipp of the said towne may one tyme or other be rebuked or slanderd. Therefore it is enacted by the auctoritie aforsaid, that none of the occupac’ons do from the feast of Easter next ensuing presume, or in any wise sett upp any shopp to occupye any of the said occupac’ons fro’ the cornell shopp unto the style of our lady churchiard adioyning to St. Peter [h]is priests chamber upon payne of vi s. viijd. totiens quotiens, to be forfaicted by the owner of the shopp and the occupier of the same equally. Of which forfaict the Sov’aign for tbe tyme being shall have the one half and the commons th’other half.” 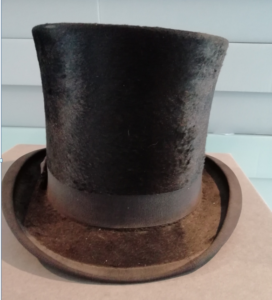 This top hat is part of the collection at Rothe House.  The top hat as a garment has an equally curious and interesting history.
The top hat is said to have been invented in 1797 by John Hetherington, and English milliner, who caused a riot when he gave it its first public outing.  He was charged with ‘having appeared on the public highway wearing upon his head a tall structure having a shining lustre and calculated to frighten timid people’.
Top hats were popularised during the Regency period by the famous dandy, George ‘Beau’ Brummel.  This in itself is curious as he is said to have espoused the understated and to have spurned flamboyance. The top hat was popularised by him to the extent that it became an essential item in the wardrobe of the wealthy upper classes.
The ‘shining lustre’ which frightened timid people may have been due to its silken surface.  Later top hats were made of felt.  Initially, the felt used was made of beaver fur.  A top hat made of beaver fur felt held its shape in the rain hence a top hat was often referred to as a ‘beaver’.  Beaver pelts came predominantly from North America and the popularity of the hat was greatly responsible for the decline in the North American beaver population.
Making top hats was a dangerous business.  Transforming beaver fur to felt involved a process known as ‘carroting’ as the use of mercury in the felting process turned the fur fibres orange.  Hatters who had been exposed for a long period of time to mercury were often poisoned.  Mercury poisoning affected the brain producing symptoms of dementia, deafness, blindness, tooth loss, tremors and spasms.
The unfortunate sufferers presented as ‘mad’, hence the term ‘mad as a hatter’.

Important Dates for your diary

The annual overseas outing of the Society has become established as a popular and well supported undertaking. Next year we are heading to France where we will be based in scenic Saint. Brieuc.
Among the attractions we intend to visit are (in alphabetical order)

Add in excellent garden visits, skilled guides, enjoying memorial sea-food meals, the products of fine wineries and small wonder these outings are always over-subscribed.  Seats can be booked for a small deposit of just €50,00  Total price is €995.00 per person
Already the dates for 2020 have been established. An exciting and varied programme of locations, visits and attractions are being arranged.

Events still to come this year:
Wednesday November 13th: Lecture the Irish War of Independence by Owen Swithin-Walsh
In Rothe House at 8.00pm
Sunday December 8th: Our popular Christmas Lunch. Panto and many spot prizes in our Free draw