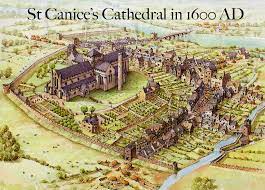 In the long history of Irish urbanization, Kilkenny is exceptional in many respects. David Dickson’s lecture will focus on the ‘long’ eighteenth century, the time when the first true cities emerged in Ireland, bursting out beyond their ancient walls during what was an era of internal peace.   But these ‘first cities’ were all maritime ports – except for Kilkenny.  Why was there such emphatic port-city growth at that time, and how was Kilkenny’s own expansion linked to this?  What was distinctive about the city’s eighteenth-century economy, and why did these distinctive elements recede in the nineteenth century? The final part of the lecture will consider the social and religious make-up of the eighteenth-century city – up to and during the turbulent 1790s.  Was there anything unusual here too?  Was the religious conflict and exclusion, so evident in most Irish cities, replicated in Kilkenny?

David Dickson is professor of modern history in Trinity College, Dublin.  His special interests are along three lines: Irish urbanization over the long run; the agrarian history of Ireland and its regions between 1650 and 1850; and the emigration of human capital from Ireland to the English-speaking world, He has lectured widely, with a number of articles and books published on his specialities, most recently. The First Irish Cities. an eighteenth century transformation, Yale University Press.  He has written extensively on the social, economic and cultural history of Ireland. He has also written extensively on Kilkenny City over the last 30 years and has contributed to many learned papers and publications on the city.