Welcome to the Christmas edition of the Kilkenny Archaeological Society’s newsletter. When speaking of Christmas our thoughts for the new year will soon follow and speaking of 2019, we have a sneak preview of our early 2019 events programme. The full programme will be revealed at our annual Christmas lunch on the 9th December, where all are most welcome.
If you have topics or news of interest to the readers of this newsletter please contact the PR Subcommittee by email to the following address: PRofficer.kas@gmail.com.

Talbot’s Tower is the most impressive remnant of the Kilkenny city walls. The site fronts  onto present day New St, near the junction with Ormonde Road, a stones throw from St Patrick’s church. It’s name is relatively recent and derives from a 15th century mayor of the city.
Kilkenny City’s stone walls were built in the mid 13th century by Gilbert de Clare, grandson of William Marshall.They ran for over 2 miles and incorporated 7 gate houses  and 9 towers. Of these, only T 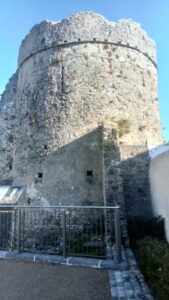 albot’s Tower survives complete. It marked a corner of the walls. From it, they ran east, north-east to the castle, and north, north-west to the Breagagh river near the Black Abbey.
The site is open to the public but access to the interior of the tower and the roof is by appointment only. The site has several information placards giving the history of the tower.
Standing on a low hill, it gave a good view of the countryside as well as acting as accommodation for the wall guards. It stands 9.7m high and has an internal diameter of 5.6m. It’s walls are 1.65m thick and slope to the bottom of the town ditch. Originally the tower had a timber roof. This was replaced in the 1400’s with a stone roof.  This also raised the height of the tower by about a third. The current structure is the result of at least three different building episodes.
Restoration, overseen by Kilkenny County Council, began in 2006 and the official reopening was on the 3rd of may this year (2018).

A producer on the BBC History Programme ‘A House Through Time’ contacted the Library recently with a query about Richard (Dick) Purcell.  The current TV series will cover a house in Newcastle upon Tyne which an Irish woman, Rose Kerrigan (nee McQueeney), ran as a lodging house in the 1920s.  Her husband Ned was a close friend of Dick Purcell.  Following a search we rediscovered the Purcell file, donated to us by Nuala Vermeiren (Richard Purcell’s daughter) in 2009 mediated by Brian and Ann Metcalf.

Purcell was born at Railyard, Castlecomer in 1882 to Garrett Purcell and Ellen Brennan.  He moved to Tyneside in England in 1901 and worked in the mines there for 20 years.  He married Linda Turnbull in 1907 and they had four children.  He was active in Sinn Féin and in the Irish Self-Determination League for which he was a full time paid organizer for the Tyneside District and was active in arranging meetings and giving speeches.  In 1921 he was arrested in possession of 350 lbs of explosives belonging to Bebside Colliery while in the process of moving them to Newcastle.  At Newcastle Crown Court he was found guilty with others including Gilbert Barringtonand sentenced to 3 years penal servitude in Dartmoor.  He was released in 1922 on foot of the Anglo-Irish Treaty.  Dick took the pro-treaty side in the Irish Civil War.  He returned to Ireland in 1922 and was based in Dublin.  The following year he was appointed as CumannnaGaedhael organizer for Kilkenny and Carlow.  He fell ill in 1929, travelled to Switzerland for treatment but died in Leysin in 1930.

Our folder on Dick Purcell contains biographical information, census information, family tree, and original correspondence re the Irish Self-Determination League on Tyneside.  Newspaper cuttings deal with the trial and tributes to him after his death.  Watch out for the programme.

This editions Curators choice artefact is a Mega choice. I have chosen our Cist burial, located in the Second Courtyard.

The burial was discovered in July, 1982 during construction works. It was found in Killinane, Bagenalstown, Co. Carlow on a south facing slope. Although the capstone was slightly disturbed by a digger, it was possible to gauge its original position.

As the site was to be covered in concrete, it was felt that excavation was necessary for the survival of the cist burial. It was removed to Rothe House, where it was fully constructed in the Courtyard.

Inside the cist burial was a cremation of two individuals and in the North East corner of the pit was an earthen pot, also known as a Tri-Partite Bowl Food Vessel. Aside from some encrustation of carbonate of lime, the pot was remarkably well preserved. From the remains of the cremation, it was possible to decipher parts of the mandible (jawbone), vertebrae, arm bones, fingers and toe bones and some teeth!

The style and characteristics of the burial place it in the Early Bronze Age (1800-1500 BC). This area of the country is particularly known for its cist burials containing cremations and/or inhumations.

Welcome back to Lavery painting.

Work has been completed on the valuable Lavery painting and two of the three are again hung in the Phelan Room. Great care and time was expended on their suitable presentation.

See photo below: Olivia Bergin, Hon. Curator with Amanda Pitcairn and Ashley Moran-Nunn putting the finishing touches to the ornate frame of the Lady Lavery Painting. 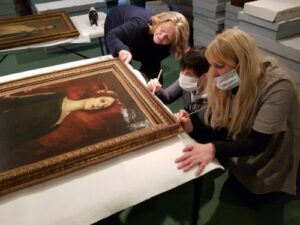 The busy programme of event is now winding down with just the annual party lunch to come in the Club House on Sunday 9th at 1.00pm. Always popular and well supported this year we have added music to the range of attractions on offer. Contact Reception in Rothe house to book your seat (while there is still time!) The full package is a very manageable €29.00 per person

The annual quiz presided over by Grace Fegan in Bollards was well supported and proved to be a financial and social success. Thirteen tables slugged (interesting word!) it out before the winner was declared – and promptly forgotten by your scribe.

Big thanks to Grace and to all who supported the raffle by providing prizes and buying tickets.

The winning team is in the foreground. 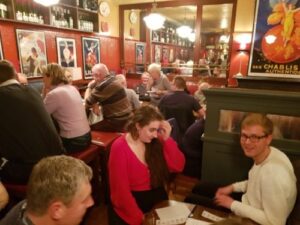 The energetic programme committee are putting the final touches to the extensive and exciting programme for 2019 (what ever happened to 2018, it was over in a flash!) The printed programme will be available at the Christmas party lunch and will bring details of the crowed programme. A few high lights and dates for your diary.

January 13th A special Afternoon tea is planned in BUTLER House as it was the location of the meeting on 13 January 1869 of the then named Historic and Archaeological Society of Ireland- one of the many names applied at various times to “Us” in KAS. An invited guest will sketch out the history of KAS since its inception.

Only a limited number of tickets will be available for this “once-off” event. Tickets can be purchased from Rothe House at €20.00 per person.

January 23th Our member Dr Proinsias O Drisceoil will take on Native Irish Speakers in the Johnswell areas in the 20th century, a presentation that draws on his detailed research of this out of the ordinary and note worthy survival of the Irish language in rural Kilkenny.

Tentative date for the launch of the Old Kilkenny Review is Wednesday February 6th while the AGM will be staged in Rothe House on Wednesday 27th.

Plans are progressing for a two day /one overnight outing to Trim and the Boyne valley with a detailed programme available before March 1st.

The event for later in the year will be unveiled at the Christmas party on December 9th.